CEBUANO CYCLIST GETS SLOT TO U-23 ELITE TRAINING CAMP 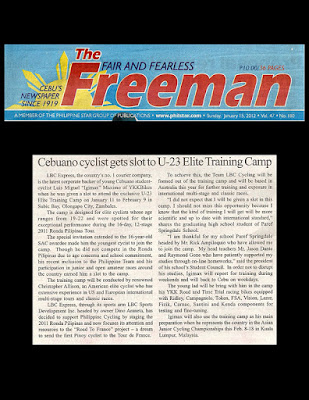 LBC Express, the country’s no. 1 courier company, is the latest corporate backer of young Cebuano student-cyclist Luis Miguel “Igimax”Maximo of YKKBikes when he was given a slot to attend the exclusive U-23 Elite Training Camp on January 11 to February  9, 2012 in Subic Bay, Olongapo City, Zambales.


The camp is designed for elite cyclists in U-23 whose age ranges from 19-22 years old who were spotted for exceptional performance during the 16-day, 12-stage 2011 Ronda Pilipinas Tour.


The special invitation extended to the young 16 year-old SAC awardee made him the youngest cycist to join the camp.  Though he did not compete in the Ronda Pilipinas due to age concerns and school commitment, his recent inclusion to the Phil National Cycling Team and his participation in junior and open amateur races around the country earned him the special invitation to join the elite camp.


The training camp will be conducted by renowned Christopher Allison, an American elite cyclist who has extensive experience in US and European international multi-stage tours and classic races.


LBC Express, through its sports arm LBC Sports Development Inc, headed by owner Dino Araneta, have decided to support Philippine Cycling by staging the 2011 Ronda Pilipinas and now focuses its attention and resources to the “Road To France” project – a dream to send the first Pinoy cyclists to join the Tour de France.

To achieve this, the Team LBC Cycling will be formed out of the training camp and will be based in Australia this year for further training and exposure in international multi-stage and classic races.


“I did not expect that I will be given a slot in this camp. I should not miss this opportunity because I know that the kind of training I will get will be more scientific and up to date with international standard,” shares the graduating high school student of Paref Springdale School.


“I am thankful for my school Paref Springdale headed by Mr Rick Ampiloquio who have allowed me to join the camp.  My head teachers Mr Jason Dante and Raymond Gone who have patiently supported my studies through on-line homeworks,” said the President of his school’s Student Council.


The young lad will be bring with him in the camp his YKK Road and Time Trial racing bikes equipped with Ridley, Campagnolo, Token, FSA, Vision, Lazer, Fizik, Carnac, Santini and Kenda components for testing and fine-tuning.


The youngest member of the Phil National Cycling Team will also use the training camp in preparation when he represents the country in the Asian Junior Cycling Championships this Feb 8-18 in Kuala Lumpur, Malaysia.
at 4:54 PM