RACING WITH THE BIG BOYS 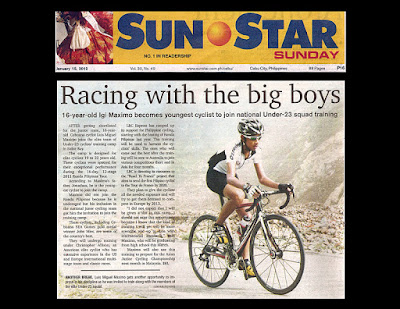 AFTER getting shortlisted for the junior team, 16-year-old Cebuano cyclist Luis Miguel Maximo joins the elite team of Under-23 cyclists’ training camp in Subic Bay.


The camp is designed for elite cyclists 19 to 22 years old. These cyclists were spotted for their exceptional performance during the 16-day, 12-stage 2011 Ronda Pilipinas Tour.


According to Maximo’s father, Jonathan, he is the youngest cyclist to join the camp.


Maximo did not join the Ronda Pilipinas because he is underaged but his inclusion in the national junor cycling team got him the invitation to join the training camp.


These cyclists, including Cebuano SEA Games gold medal winner John Mier, are some of the country’s best.


They will undergo training under Christopher Allison, an American elite cyclist who has extensive experience in the US and Europe international multi-stage tours and classic races.


LBC Express has ramped up its support for Philippine cycling, starting with the hosting of Ronda Pilipinas last year. This training will be used to harness the cyclists’ skills. The ones who will come out the best after the training will be sent to Australia to join various competitions there and in Asia for four months.


LBC is directing its resources to the “Road To France” project that aims to send the first Filipino cyclist to the Tour de France by 2020.


They plan to give the cyclists all the needed exposure and will try to get them licensed to compete in Europe by 2013.


“I did not expect that I will be given a slot in this camp. I should not miss this opportunity because I know that the kind of training I will get will be more scientific and up to date with international standards,” said Maximo, who will be graduating from high school this March.


Maximo will also use this training to prepare for the Asian Junior Cycling Championship next month in Malaysia.