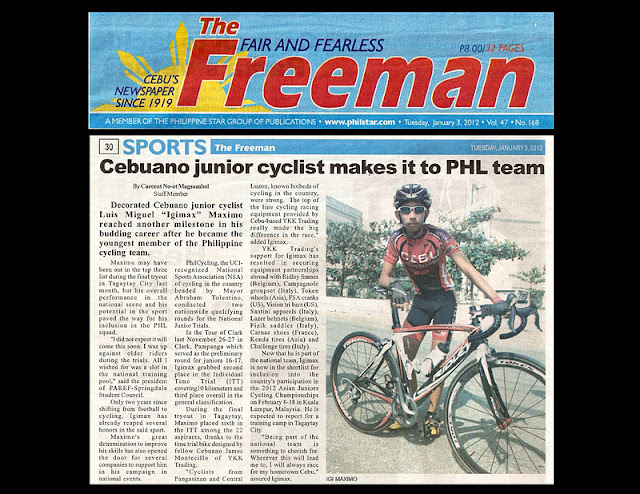 
Maximo may have been out in the top three list during the final tryout in Tagaytay City last month, but his overall performance in the national scene and his potential in the sport paved the way for his inclusion in the PHL squad.


"I did not expect it will come this soon. I was up against older riders during the trials. All I wished for was a slot in the national training pool," said the president of PAREF-Springdale Student Council.


Only two years since shifting from football to cycling, Igimax has already reaped several honors in the said sport.


Maximo's great determination to improve his skills has also opened the door for several companies to support him in his campaign in national events.


In the Tour of Clark last November 26-27 in Clark, Pampanga which served as the preliminary round for juniors 16-17, Igimax grabbed second place in the Individual Time Trial (ITT) covering10 kilometers and third place overall in the general classification.


During the final tryout in Tagaytay, Maximo placed sixth in the ITT among the 22 aspirants, thanks to the time trial bike designed by fellow Cebuano James Montecillo of YKK Trading.


"Cyclists from Pangasinan and Central Luzon, known hotbeds of cycling in the country, were strong. The top of the line cycling racing equipment provided by Cebu-based YKK Trading really made the big difference in the race," added Igimax.


Now that he is part of the national team, Igimax is now in the shortlist for inclusion into the country's participation in the 2012 Asian Juniors Cycling Championships on February 8-18 in Kuala Lumpur, Malaysia. He is expected to report for a training camp in Tagaytay City.


"Being part of the national team is something to cherish for. Wherever this will lead me to, I will always race for my hometown Cebu," assured Igimax. - (THE FREEMAN)
at 10:56 PM