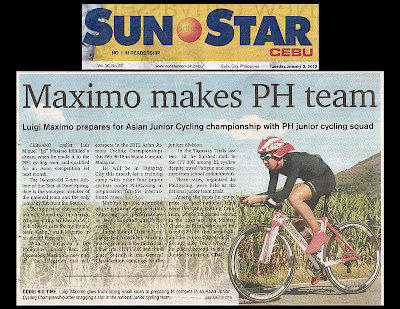 CEBUANO cyclist Luis Miguel “Igi” Maximo fulfilled a dream when he made it to the PHL cycling team and qualified for an Asian competition set next month.


The 16-year-old 7-time Athlete of the Year of Paref-Springdale is the youngest member of the national team and the only junior cyclist from the South.


"Being part of the national team is something to cherish. Wherever this will lead me, I will always race for my hometown Cebu," said Maximo in an e-mail message.


With his inclusion in the Philippine Junior Team last December, Maximo is now part of the delegation that will compete in the 2012 Asian Juniors Cycling Championships this Feb. 8-18 in Kuala Lumpur, Malaysia.


He will be in Tagaytay City this month for a training camp with other four junior cyclists under PhilCycling in preparation for the international race.


Maximo got the attention of the national team officials following his performances in two national qualifying races.


In the Tour of Clark in Pampanga last November, Maximo placed second in the Individual Time Trial (ITT) 10K and third place overall in the General Classification standings for the juniors division.


In the Tagaytay Trials last Dec. 12, he finished sixth in the ITT 30K among 22 cyclists despite travel fatigue and pressure from school commitments.


These races, organized by PhilCycling, were held as the national junior team trials.