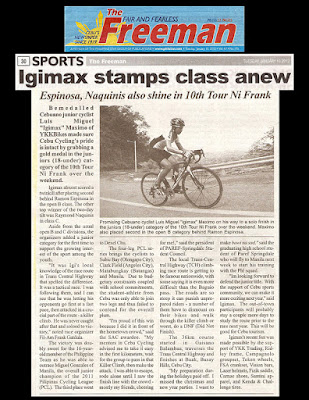 Published in The Freeman Newspaper on Jan. 10, 2012 Tuesday issue

CEBU, Philippines - Bemedalled Cebuano junior cyclist Luis Miguel "Igimax" Maximo of YKKBikes made sure Cebu Cycling's pride is intact by grabbing a gold medal in the juniors (18-under) category of the 10th Tour Ni Frank over the weekend.


Igimax almost scored a twinkill after placing second behind Ramon Espinosa in the open B class. The other top winner of the two-day tilt was Raymond Naquinis in class C.


Aside from the usual open B and C divisions, the organizers added a junior category for the first time to support the growing interest of the sport among the youth. 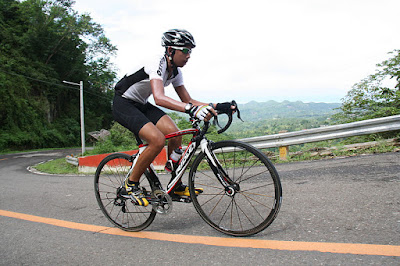 Promising Cebuano cyclist Luis Miguel "Igimax" Maximo on his way to a solo finish in the Juniors (18-under) category of the 10th Tour ni Frank over the weekend.  Maximo also placed second in the Open B category behind Ramon Espinosa

"It was Igi's local knowledge of the race route in Trans Central Highway that spelled the difference. It was a tactical race. I was following them, and I can see that he was letting his opponents go first at a fast pace, then attacked in a crucial part of the route - a killer climb. He was never caught after that and soloed to victory," noted race organizer Fil-Am Frank Gatdula.


The victory was doubly sweet for the 16-year-old member of the Philippine Team as he was able to outrace Miguel Gonzales of Manila, the overall junior champion of the 2011 Pilipinas Cycling League (PCL). The third place went to Dexel Chu.


The four-leg PCL series brings the cyclists to Subic Bay (Olongapo City), Clark Field (Angeles City), Matabungkay (Batangas) and Manila. Due to budgetary constraints coupled with school commitments, the student-athlete from Cebu was only able to join two legs and thus failed to contend for the overall plum.


"I'm proud of this win because I did it in front of the hometown crowd," said the SAC awardee. "My mentors in Cebu Cycling advised me to take it easy in the first kilometers, wait for the group to pass in that Killer Climb, then make the attack. I was able to escape, rode alone until I saw the finish line with the crowd - mostly my friends, cheering for me!," said the president of PAREF-Springdale Student Council.


The local Trans-Central Highway (TCH) climbing race route is getting to be famous nationwide, with some saying it is even more difficult than the Baguio pass. The roads are so steep it can punish unprepared riders - a number of them have to dismount on their bikes and walk through the killer climb or worst, do a DNF (Did Not Finish).


"My preparation during the holidays paid off. I missed the christmas and new year parties. I want to make bawi na sad," said the graduating high school student of Paref Springdale who will fly to Manila next week to start his training with the Phl squad.


"Im looking forward to defend the junior title. With the support of Cebu sports community, we can make it more exciting next year," said Igimax. The out-of-town participants will probably stay a couple more days to study the route prior to the race next year. This will be good for Cebu tourism.