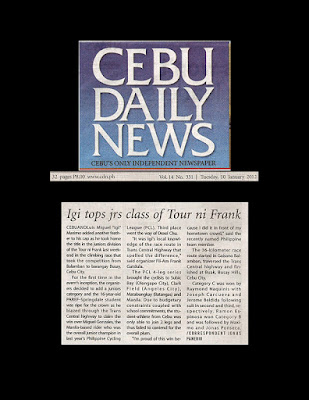 
CEBUANO Luis Miguel "Igi" Maximo added another feather to his cap as he took home the title in the juniors division of the Tour ni Frank last weekend in the climbing race that took the competition from Balamban to barangay Busay, Cebu City.


For the first time in the event's inception, the organizers decided to add a juniors category and the 16-year-old PAREF-Springdale student was ripe for the crown as he blazed through the Trans Central highway to claim the win over Miguel Gonzales, the Manila-based rider who was the overall junior champion in last year's Philippine Cycling League (PCL).  Third place went the way of Dexel Chu.


"It was Igi's local knowledge of the race route in Trans Central Highway that spelled the difference," said organizer Fil-Am Frank Gatdula.


The PCL 4-leg series brought the cyclists to Subic Bay (Olongapo), Clark Field (Angeles City), Matabungkay (Batangas) and Manila.  Due to budgetary constraints coupled with school commitments, the student-athlete from Cebu was only able to join 2 legs and thus failed to contend for the overall plum.


"I'm proud of this win because I did it in front of my hometown crowd," said the recently named Philippine team member.


Category C was won by Raymond Naquinis with Joseph Carcueva and Jerome Beldida following suit in second and third, respectively.  Ramon Espinosa won Category B and was followed by Maximo and Jonas Ponseca./CORRESPONDENT JONAS PANERIO.
at 11:46 AM