I always had this mistaken notion that all highways are wide and flat, but not until I rode the TCH, which has the profile of a buzz saw.


At just over 90kg, my chance of getting a top 20 was nil. In fact, finishing the race was my main goal. I’ve crossed the TCH 6 times, twice during a race. In last year’s race, fatigue and poor form made me stop, the only time I didn’t finish.
From the start in Toledo to the easier slopes in Balamban, I paced the group, thinking that I’d get a nice workout before stopping. As the climb started, I realized that not everybody passed me by. And when the road really steepened, I unsaddled and walked. The funny thing was, I only realized that I can go faster when I walked. After the race, my friendly rival, Jong Sepulveda, who I dropped earlier but later passed and then dropped me, on foot, no less, confirmed my observation by saying that walking saved his legs for the bike part!
The nice thing about the TCH, if you’re going to eastward, is that it gets “easier” near the end. Of course, “easier” is relative for the unprepared. I passed by a few cyclists from Manila who had inadequate gearing, suffering the climb. “!@#% ito!”, one said.
For me, the TCH is not about racing with other cyclists, it’s about discovering your inner self. It’s a metaphor of life. It’s about the pain and suffering and realizing that you can overcome if you prepare for it.
I know I didn’t suffer alone. Dondie Azarcon, the winner of the previous day’s crit race, rode to a crawl because of cramps. Toshio Nagashima, our friend from Japan, also suffered. Larry Stahlman finished high in the rankings because he was prepared, his gearing was for climbing Everest! Igi Maximo, a 14-yo neophyte, wasn’t unnerved by the peloton and the competition and finished well in his 4th race, which is phenomenal! I knew Brett Harrington wasn’t a climber but this tough Aussie can descend like a stone. I didn’t know that Dr. Wency Rich, an anesthesiologist from Maasin, can climb and suffer at the same time!
I’m sure every cyclist had their own personal story of pain and suffering. And I hope they’ll be back next year. Which reminded me of Theo de Rooij, a Dutch pro cyclist who finished the grueling 260km race (50Km of cobbles!) back in 1985. he said, “It’s a bollocks, this race! You’re working like an animal, you don’t have time to piss, you wet your pants. You’re riding in mud like this, you’re slipping ... it’s a pile of shit.” When then asked if he would start the race again, de Rooij replied: “Sure, it’s the most beautiful race in the world!
The TnF may not be the best race in the world, but in my mind, the TCH makes it the most beautiful. I’ll be back!... 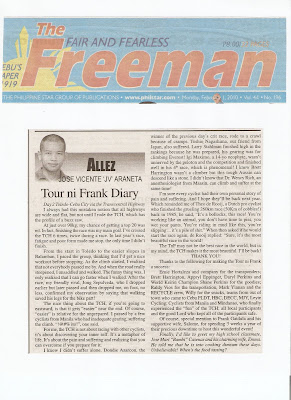