Published in The Freeman Newspaper Feb. 21, 2010 Sunday issue
by Caecent No-ot Magsumbol, Staff Writer
Manny Villaruel, Sports Editor
Link:http://www.philstar.com/Article.aspx?articleId=551630&publicationSubCategoryId=110
CEBU, Philippines - With all the heart-warming support given to him, promising Cebuano cyclist Luis Miguel “Igi” Maximo is raring to take another shot at glory in the Philippine Premiere Cycling League’s second round at Nuvali in Sta. Rosa, Laguna today.
Maximo will defend his junior division title after ruling the first round held at the Macapagal Avenue in Pasay City. 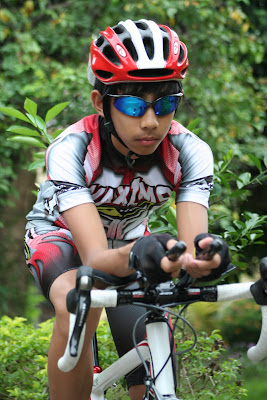 The Oz Racing-sponsored Luis Miguel "Igi" Maximo is all set to defend his title in the second round of PPCL cycling tournament today in Sta.Rosa, Laguna.
(Published in The Freeman Newspaper Feb. 21, 2010 Sunday issue.)
The Paref-Springdale football player-turned cyclist is doubly ecstatic about the race, not only because he is set to prove that his win during round 1 was just a beginner’s luck but also because he will now be sporting a new cycling outfit courtesy of Zandro Fajardo of Oz Racing.
Fajardo, a former motocrosser-turned businessman, saw the potential of Igimax, as he now fondly called in the Cebu cycling community, during the round 1.
Fajardo readily took a time out with Igimax’s father, Jonathan Maximo, and offered a sponsorship deal with the young pedal-pusher.
Fajardo had also been sponsoring the cycling apparel of RP standout mountainbiker Niño Surban for sometime now.
“Mr. Fajardo has expressed his desire to promote junior cycling and sees the potential of Igi as one of the young ambassadors in the development and promotion of cycling as a sport in Cebu and the country,” said Igi’s dad, Jonathan.
Aside from defending his title, Igimax will also compete as a guest rider in the Liquigas Junior Cycling Team, a developmental squad of the world famous Liquigas company here in the country and hope to improve his ranking against the big guys in the individual time trial.
Liquigas will race in the Team Time Trial which covers a total distance of 47 kilometers.
at 3:36 AM