MAXIMO WINS ANEW IN PPCL ROUND 2

Published in Cebu Daily Newspaper Feb 23, 2010 Tuesday issue
by Jonas Panerio, Correspondent
Rick Gabuya, Sports Editor
Link:http://globalnation.inquirer.net/cebudailynews/sports/view/20100223-254845/Maximo-wins-anew-in-PPCL-Round-2
Luis Miguel “Igi” Maximo was at his best anew in the national cycling scene as he successfully defended his title in the juniors division of the Philippine Premier Cycling League Round 2 last Sunday in Nuvali, Sta. Rosa City, Laguna.
The 14-year old student of PAREF-Springdale came in first in the criterium race as he bided his time before going all out in the second of the two-lap, 11-kilometer race.


He bested second-placer Allen Santiago and third-placer Rudolph Carolino.
He previously won the first leg of the circuit, which was held at the Macapagal Avenue.
Because of his success this year, Maximo has been invited to be part of the Liquigas Junior Cycling team, a developmental squad of the Liquigas company.
Aside from the criterium race, the juniors also raced in the individual time trial and team time trial races.
No results were released in the other two races as of press time.
A total of 274 participants competed in the second leg of the PPCL. 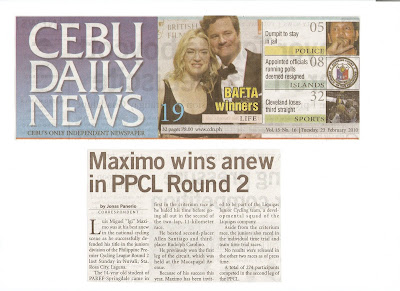