YOUNG Cebuano cyclist Igi Maximo made a name for himself in the national racing scene as he won the championship in the juniors division of the Philippine Premier Cycling League yesterday at the Macapagal Avenue in Parañaque City.
The 14-year old Maximo, originally a football player in the time of his father's presidency in the Cebu Football Association (CebuFA), is now blazing a trail in the cycling scene, winning the 13-kilometer race with a time of 21 minutes and 41.67 seconds.
He upset Allen Santiago, a former RP team member of the Jr. Triathlon squad, who just arrived from Japan for an international event. In third was Joel Famacion while Kenneth Balunsay finished in fourth place. Finishing in fifth was John Duenas.
It was a cat-and-mouse race between Maximo and Santiago with the latter attempting several breakaways all throughout the race.
Maximo, though, remained in close pursuit until the end, where he staged his own breakaway, to which Santiago was not able to keep up with. /CORRESPONDENT JONAS PANERIO 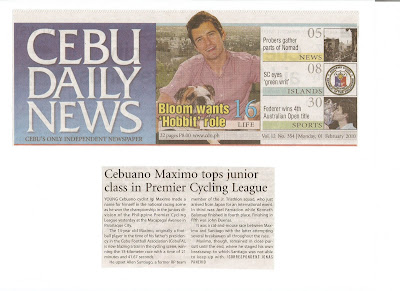