IGI MAXIMO GETS INVITE TO DEFEND TITLE IN PPCL EVENT


CEBU, Philippines - Promising Cebuano pedal-pusher Luis Miguel “Igi” Maximo has been invited to defend his junior division title in the criterium competition when the 2010 Philippine Premiere Cycling League unfolds its second leg on February 21 at Nuvali in Sta. Rosa.
Maximo is aching to defend his throne but he will seek first the permission of his school, Springdale, to compete in Manila again. Just like Springdale’s support to its student-athletes, the same is expected by the supporters of Igi.
Maximo, a football player turned cyclist, made an impressive debut in the PPCL staged at the Aseana Complex along Macapagal Boulevard in Manila over the weekend.
Maximo scored an upset over RP junior triathlete Allen Santiago to clinch the top spot in the juniors division of the criterium race. He then saw action in the individual time trial and team time trial against older and seasoned racers.
Against the big guys, the 14-year-old Maximo posted 33 minutes and 29 seconds in a 17-kilometer ITT battle even if he was not using a trial bike.
Winning the gold in the junior criterium came as a surprise to award-winning sportsman Jonathan “Maxi” Maximo, father of Igi, as he just want his son to have a memorable finish in his first out-of-town race.
While waiting for the go signal from his school, Igi will continue to challenge the veteran riders of Cebu both in the racer and mountainbike action as well as play football for Springdale where he remains the team captain. – Caecent No-ot Magsumbol . (FREEMAN NEWS) 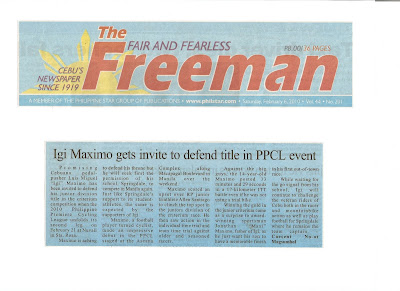