Wearing a specially-designed outfit by his corporate sponsor OZ Racing, a highly inspired Luis Miguel "Igimax" Maximo lived up to expectations as he achieved back-to-back victories in the second round of the Philippine Premiere Cycling League (PPCL) Series the other day at Nuvali in Sta. Rosa, Laguna.
Proving that he is worthy of such support by OZ Racing, the promising Cebuano racer zoomed to the top spot in the youth class of the latest PPCL action also known as "Tour of Nuvali". 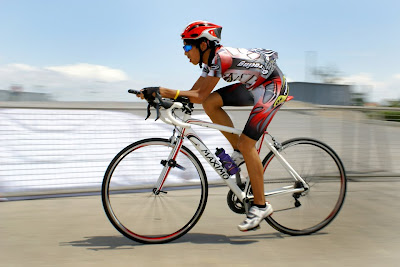 Promising Cebuano cyclist Luis Miguel "Igimax" Maximo, sponsored by OZ Racing, lives up to his billing as he successfully defends his youth division title in the second round of PPCL Series the other day at Nuvali in Sta. Rosa, Laguna.  (The Freeman Newspaper Feb. 23, 2010 Tuesday issue).  Photo courtesy of Angelo Barretto.
Igimax, a student of Paref-Springdale, defended his title as the best young racer in the criterium after outsmarting Allen Santiago and Rudolph Carolino, who wound up second and third, respectively.
The competition was very tough because more pedal-pushers joined the junior class, but Igimax showed grace under pressure on the way to top the 11-kilometer battle to the delight of his dad Jonathan and benefactor Zandro Fajardo of OZ Racing who personally flew to Manila to cheer for his ward.
Igimax also saw action in the Individual Time Trial and in the Team Time Trial under Liquigas Youth squad as a guest rider, but no results have been handed to them as of this writing.
The TTT, however, was more of an exposure for the young racers as they are competing against the senior cyclists.
Another decorated Cebuano cyclist Noy Jopson also took part in the contest and was a key player in pushing the Polo Tri team to a second place finish in the TTT.
"The PPCL Junior field is getting tougher as more and more racers are competing, particularly the triathletes," noted Igi's dad, award-winning sportsman Jonathan "Maxi" Maximo.  Igi's participation in the weekly criterium at reclamation with the adults has helped in his endurance.  Also, the support Igi got from the Cebu cycling community has been heart-warming," added Maximo. - Caecent No-ot Magsumbol 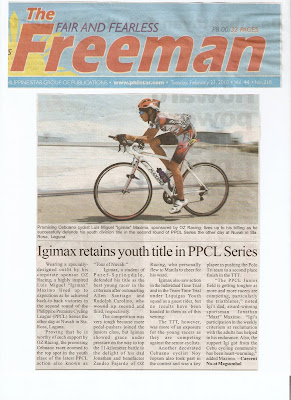 Amiable brief and this enter helped me alot in my college assignement. Say thank you you on your information.