NO I’M not talking about that darn show where the host supposedly talks with dead people.

I’m talking about Iggy Maximo and Jose Maria Navarro and other guys like them out there who have successfully crossed over to other sports.


Iggy and Jose Maria are footballers who have found success in individual events—Iggy, in road racing and Jose Maria, in running.
Iggy, the son of former Cebu Football Association president Jonathan and wife Sheila, still plays football, but lately, he’s a regular participant in running events and in cycling. He even won a junior category of a road race in Manila a couple of weeks ago.
His sister, Bea, took the other way around. She took time off from Manila, playing football, and managed to finish at No. 16 in the 21K women’s division of the Cebu City Marathon.
Jose Maria or Popoy, is the son of Cebu’s Michael Buffer, Rico Navarro, and isn’t too shabby, either.
I remember this kid scoring a ha trick in the 7-Under finals and banging the lone goal in the finals against Iggy’s team, Springdale, back in those good old days.
Now, he’s busy lacing his track shoes for the Sacred Heart School-Jesuits (SHS-J) team.
SHS-J is a relative newcomer in athletics, but thanks to coach Precing Capangpangan’s unique approach, the school is now reaping gold medals in the Cviraa.
Since developing runners from scratch would take a long process, the coach invited students who are into other sports to try the track and field team—guys like Josemaria.
And being natural athletes, crossing over was quite easy for them.
Being good in one thing is tough, being good in a lot of things, tougher.
This reminds me of a time in high school when our football game in the District Meet was postponed for a few hours.
You know why? Members of the opposing team were still playing basketball, a couple were in tennis, and a few were in track and field. I think they had eight guys who made the core of their basketball, football, volleyball and baseball teams.
We could have won by default, but since they were our neighbors, we just waited... 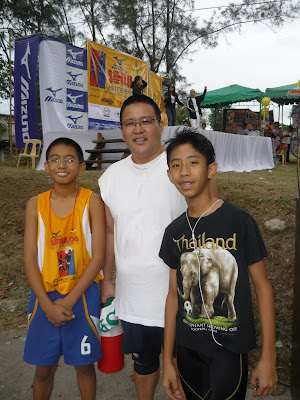 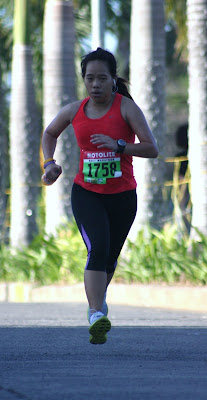 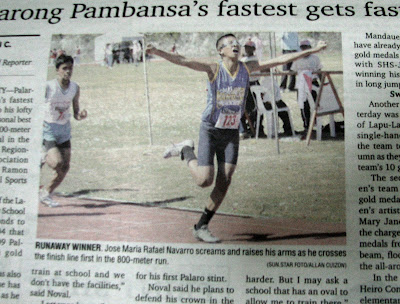 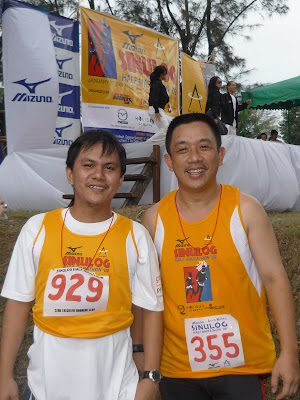 The author, left, Jerome "Mico" Limpag with his patented mid-rib singlet and PaBol's Jonathan "Maxi" Maximo.  Photo taken during the Sinulog Cebu City Half-Marathon 2009. No, both did not run the 21K Half-Mary, just the 5K Fun Run (for now)